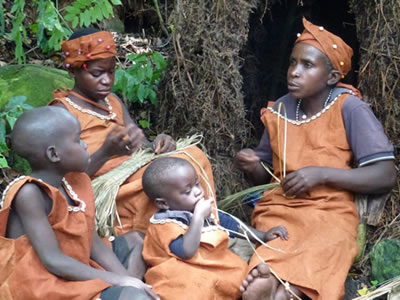 Mgahinga Gorilla National Park sits high in the clouds, at an altitude of between 2,227m and 4,127m. As its name suggests, it was created to protect the rare mountain gorillas that inhabit its dense forests, and it is also an important habitat for the endangered golden monkey. As well as being important for wildlife, the park also has a huge cultural significance, in particular for the indigenous Batwa pygmies. This tribe of hunter-gatherers was the forest’s “first people”, and their ancient knowledge of its secrets remains unrivalled.

Mgahinga’s most striking features are its three conical, extinct volcanoes, part of the spectacular Virunga Range that lies along the border region of Uganda, Congo and Rwanda. Mgahinga forms part of the much larger Virunga Conservation Area which includes adjacent parks in these countries. The volcanoes’ slopes contain various ecosystems and are biologically diverse, and their peaks provide a striking backdrop to this gorgeous scenery.

Mgahinga Gorilla National Park, one of Uganda’s smallest parks, but one that comes with many Things to do and see things to do and see for the experiential and adventurous Hikers and Climbers, and place for those interested in gorilla trekking safaris, off of the beaten Path, while others come to for golden monkey tracking. Mgahinga Gorilla National Park is also home to 3 of the Virunga Volcanoes, known locally as the as the Mufumbiro Mountains, translated to “the Mountains that Cook.”

Hiking trails including the famed Batwa Trail that looks back as to how the Batwa Pygmies, the original people of the forest once lived here.  The Sabinyo Gorge Trail and Border Trail along the Congolese Border are two favorites with Visitors to the Park.  Add on top of that Cave Exploration such as the Garama Cave, which was a place of hiding for the Batwa People and their King during times of War.

Besides Mountain Gorillas and Golden Monkeys Mgahinga Gorilla Park is home to 76 species of mammals, although they are hard to spot in the thick forest vegetation. They include giant forest mgahinga-things-to-do-page2hogs, bush pigs, forest buffaloes, elephants, bush bucks, golden cats, side striped jackals, black fronted duikers and African porcupines. The Nyakagezi Gorilla Family Group calls this their home.

They are the only habituated gorilla family group found in Mgahinga Gorilla Park.  They have a bit of wanderlust in them and like to see themselves as International Travelers and have gone into the Democratic Republic of Congo and Rwanda but in recent times they have reclaimed their Ugandan citizenship and can be tracked at the park.

As you track the gorillas you will often see golden monkeys as a bonus and other wildlife and the birds that are found at Mgahinga Park.  Gorilla Tracking begins at 8 am in the morning with an orientation. 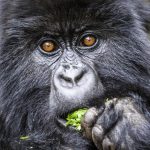