Taking safari trips in Africa no longer means that you are going to come back home looking like a Neanderthal. Rather you could relax all you want and still get all the spectacular wildlife experiences that Africa offers. The top safari camps now offer exactly that. 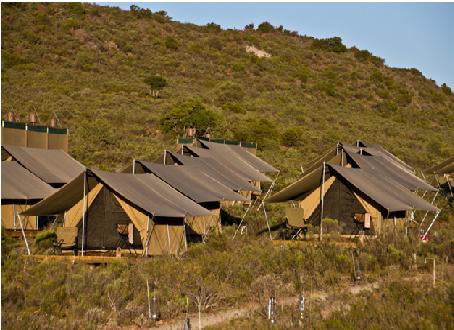 There are several luxury camps which will provide you with a bird’s eye view over a large area situated atop a hill; some are even on tree tops. They are built in such a manner that you would feel like someone from a royal family, here for game hunting. The lodges are grandiose; there is no other word for it. The accommodations could be outshined only by the wildlife-spotting. The camps offer a wide range of safari trips: jeep, foot, horseback and even elephants. Some arrange night trips so you could get a good look at the jungle nightlife.

Cottars 1920s Mara Safari Camp in Kenya is a private camp with an area of 10,000 acre bordering Kenya’s Masai Mara National Reserve and Tanzania’s Serengeti National Park. Matching its name, the place retains the ambience of 1920s within their 10 units. There are long balconies and Africana libraries and canvas baths.

Lake Manyara Tree Lodge of Lake Manyara National Park in Tanzania can be misleading in its nature and extravagance. Though named Tree Lodge, you wouldn’t find one bark anywhere near. It’s only a Tree Lodge in the sense of where it is situated. Elephants, cheetahs and giraffes roam around the warm and romantic camp.

Bushmans Kloof Wilderness Retreat of Western Cape in South Africa is a straightforward private lodge with a total of 16 luxury rooms, suites and cottages. Its main attraction is the sighting of endangered Cape Mountain Zebra. There is a spectacular spa, with a pool, crystal steam room, health bar and gym. If you’re staying at the main lodge; you would have your personal chef and ranger, along with access to private pool and library. The game spotting is great as well.

Tswalu Kalahari Reserve in South Africa is the largest privately owned game reserve in South Africa. It is designed after a traditional Tswana village with stone-walled and thatch-roofed legae or suites. There are also villas that house families. Tswalu offers you the chance to spot some of this region’s most evasive animals—black rhinos, meerkats, aardwolf and cheetah. It also hosts a hunt for the region’s most tasty fungal delicacy: Kalahari truffles.

Royal Malewane of Kruger National Park in South Africa has accommodated and pleased some of the most popular names you would know, including Nicolas Sarcozy, Bono and Paul Allen. You would have access to private infinity pools, huge window-side Victorian baths and personal butlers, rangers and trackers-meant for your use only. And as for the game sighting, you can go on a trip with one of the only two “Master Trackers” in the world, Wilson Masiya. It does not get any better than this.

Besides these, there are numerous other reserves and camps all over Africa which you would like. For your next vacation, you might want to make a memorable trip to any one of these places. Visit Africa will guide one of the best listed Africa safari operators to book with your next eco tours holidays in Africa.